The triumph of Trump

Staying up, up, up and positive

Categories
Tags
The rivalry between Hillary Clinton and Donald Trump in the American election is like a keen judo,  dramatic and filled with intrigues. With countless number of speeches giving away Trump’s idiosyncrasies, and endless allegations against Hillary on her carelessness. Like a roller-coaster, they have both rolled through the tunnel to catch the mace. The suspense for this 2016 American  election has been one like no other. Through the thick and thin of heated debates, over-rated campaigns, townhall meetings, social media exchanges and interviews, prepared and unprepared speeches, outbursts and the list goes on. The different schools of thoughts supporting the duo are passionate and highly biased towards unusual ideologies. 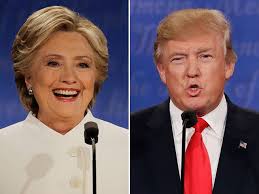 Apart from the campaign and election preparations being highly dramatic, It’s also historic having the first female presidential contestant of a highly recommended stock alongside a very rich business mogul but green politician! Some folks anticipated the breaking of another glass ceiling for the female gender with a candidate who’s got grit and gut while some just wanted a successful, fearless talker with conservative moral background. With so much flow of adrenaline, the whole world watched the emergence of the 45th president of the United States of America – President Donald Trump.
The countless commentaries on the outcome of the election projects the buy-in of Americans on underlying values that differs from what seemed to connote political correctness. The emergence of Donald Trump has shown the whole world that they would rather be conservative than been libertarian; Americans would rather pardon tax evasion criminal offence than the offence of using personal emails for government/public transactions; they would rather have walls than have open borders; they’ll rather be more white than touch of brown!
The appeal to the moralists and Christians is so intense that it overrides the sense of liberty and general acceptance that was thought to be the minimum for a free society as America. In all, Americans have chosen who they believe their country needs most at this time and to be honest, they’ve probably voted in their own version of change. We can only watch with arms akimbo what the next four years will unfold.
With the triumph of Mr. Trump, the acceptance speech showed a degree of regard even for the opposition and for the concession speech of Mrs. Clinton, it was apt! [Another topic for another day].
In our lives, we often find ourselves in situations with keen and intense emotions in decision making giving room for survival of the fittest where available alternatives have divergent but supporting characteristics. The decision to choose the most viable alternative placed in the crucible of core values, enlightened self interest, goodwill and moral narrative. It has shown in capslock that the race is not to the swift but the lesson of all time is NEVER SAY NEVER!
This template supports the sidebar's widgets. Add one or use Full Width layout.
Do NOT follow this link or you will be banned from the site!
Email Subscription
I respect your privacy.

Get the latest Posts and  Opportunities straight to your inbox

Stay updated with all latest updates,upcoming events, opportunities & much more.